Non So Dove, Ma Insieme // I don’t know where, but together by Luca Finotti for MSGM

The focus of Non So Dove, Ma Insieme (I Don’t Know Where, but Together) is on the younger MSGM generation. Passionate, free and filled with enthusiasm, we bounce back from a difficult moment by claiming the now and looking into the future.

Set in Milan to the sound of Italian musician Coez, the film speaks of love, desire and friendship, as we wander through a city about to burst with summer and sunshine. A celebration of the overwhelming intensity of life, Non So Dove, Ma Insieme stands as a powerful and joyful rebirth.

The idea for the film was born out of a brainstorming session between Giorgetti and Finotti. “MSGM has faith in our present and looks into the future with optimism, passion and poetry. The film addresses the uncertainty we have been experiencing, but also underlines the importance of being able to face it united as one. Only together can we truly dream” – states Giorgetti.

A degree in Marketing and Economy at the renowned Luigi Bocconi University in Milan, followed by further studies in cinema at the New York Film Academy provided Finotti with all the skills to be a successful artistic and viral film director. Combining powerful moving images with social media, his creations always start from an idea that is then tested against trend research. This guarantees the worldwide virality of every film and campaign, making every project a visible and shareable online experience.

Winner of Best Director with his recent film Versace Manifesto at Cinemoi Fashion Film Awards in 2018, his project #WeBelieveInThePowerOfLove for Nike was screened and awarded in more than 25 film festivals and awards across the globe including Ciclope, Aesthetica Short Film Festival, Berlin Fashion Film Festival, Venice Film Week and Video Art and Experimental Film Festival in New York. 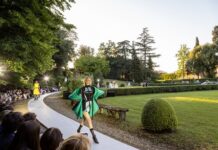