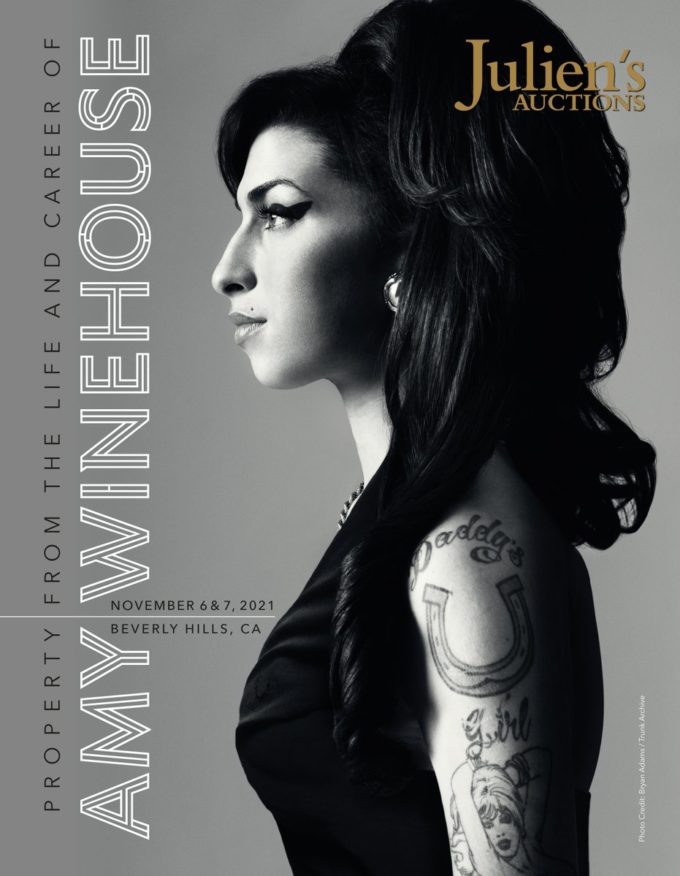 Julien’s Auctions, the world-record breaking auction house, will pay tribute to the British singer and songwriter who the BBC’s Garry Mulholland called “the pre-eminent vocal talent of her generation” with PROPERTY FROM THE LIFE AND CAREER OF AMY WINEHOUSE, a two-day auction event taking place live Saturday, November 6 and Sunday, November 7, 2021 at Julien’s Auctions in Beverly Hills and online at juliensauctions.com.

Hundreds of Amy Winehouse’s most iconic stage, photo shoot and performance worn dresses, shoes, jewelry and accessories that were synonymous with the individualistic style and signature artistry of the five-time GRAMMY Award®-winning retro-soul music superstar and pop diva as well as her most personal items will be presented for the first time at auction.

Born September 14, 1983 in North London and raised in Southgate to a family of professional jazz musicians and jazz music lovers, Amy Winehouse taught herself how to play and write music at the age of 14 by borrowing the guitar of her brother, Alex. Influenced by hearing Frank Sinatra, Sarah Vaughan and Dinah Washington at home, Winehouse sang with the local group the Bolsha Band and in 2000, became a featured vocalist with the prestigious National Jazz Orchestra at the age of 17.

In 2002, when she was 19 years old, she was signed to American Idol creator Simon Fuller’s 19 Entertainment, a publishing deal with EMI and a label deal with Island UK. That same year, she went to Miami to record her first album, with producer Salaam Remi, the hitmaker behind Nas and the Fugees, on which Winehouse cowrote all of the album’s songs apart from two covers. In 2003, her jazz inflected debut album Frank was released and earned critical raves, double platinum sales and awards in the UK, including a Mercury Music Prize nomination and the Ivor Novello Award for songwriting.

But it would be Back to Black, Winehouse’s brilliant and defining second album, that would bring the singer a tidal wave of international success and displayed to the world her unique style and greatness. Winehouse re-teamed with Remi and this time Mark Ronson – the celebrated DJ and producer for Lily Allen, Sean Paul and Christina Aguilera – who brought in the funk-and-soul band, the Dap-Kings, to back Winehouse’s soulful sound that provided the retro-cool undercurrent to the album. Winehouse’s transformation from early jazz singer to a Sixties R&B pop diva modelled after the Ronettes, the Shangri-Las and other Motown girl groups was not only showcased in her sound but in her rebellious Rock ‘N’ Roll style and attitude which she made all her own with her signature beehive updo, winged eyeliner, tattoos and bold red lipstick.

The album was released in the UK on October 30, 2006, and went to number one on the UK Album Charts and became the best-selling album in the UK that year and in the U.S. entered at number seven on the Billboard charts.

It became an instant sensation with a worldwide cross section of multigenerational fans and earned her a devoted following due to her now classic hits, “You Know I’m No Good,” “Rehab” and her anthem “Back to Black,” selling close to 10 million copies worldwide.

At the time of its release, the album was the highest charting U.S. debut ever by a British female, a title which would later be taken by UK soul singer Adele, just one of several singers who credits Winehouse for paving the way for the next generation of fearless and female singular artists. A deluxe edition of Back to Black was also released on November 5, 2007 in the UK which included B-Sides, rare and live tracks and the song “Valerie,” which featured Winehouse as a vocalist of the song on Mark Ronson’s solo album Version.

The song hit number two in the UK and was nominated for a 2008 BRIT Award for “Best British Single.” From 2006-2007, she toured and performed in numerous headline performances from Jools Holland’s Annual Hootenanny to the 2007 MTV Movie Awards and on various festivals, including Glastonbury Festival, Lollapalooza, Virgin Festival, the Isle of Wight Festival – singing with Mick Jagger in addition to her solo set – and more.

At the 2008 GRAMMY Awards®, Winehouse dominated winning five awards that night including Best New Artist, Best Pop Vocal Album, Record of the Year, Song of the Year and Best Female Pop Vocal Performance and performed “Rehab” via satellite from London. Due to her wins, Winehouse earned a Guinness World Record in 2009 for the Most GRAMMY Awards won by a British Female Act. At the 2008 Ivor Novello Awards, Winehouse became the first-ever artist to receive two nominations for the top award: Best Song, Musically and Lyrically and won the award for “Love Is a Losing Game.” Winehouse was also nominated for a 2008 MTV Europe Award for Act of the Year and Back to Black was the world’s seventh-biggest-selling album of 2008.

In 2010, Winehouse and Mark Ronson recorded a cover of Lesley Gore’s “It’s My Party” to the Quincy Jones tribute album Q Soul Bossa Nostra. On June 18, 2011, Winehouse began her 2011 European tour in Belgrade but the tour was cancelled after one show due to Winehouse’s ongoing battle with addiction. Winehouse’s last public appearance took place at Camden’s Roundhouse in London on July 20, 2011, when she made a surprise appearance on stage to support her goddaughter, Dionne Bromfield, in her performance with the group The Wanted. Winehouse’s death on July 23, 2011 stunned the world and her millions of fans. Three days later, Frank, Back to Black and the Back to Black EP re-entered the Billboard 200 at number 57, number 9 and number 152, with the album climbing to number 4 the following week. Winehouse’s last recording, “Body and Soul,” a duet with legendary singer Tony Bennett – who called Winehouse one of the finest jazz singers he ever collaborated with – recorded for his album Duets II, was released on September 14, 2011 on MTV and VH1 to commemorate what would have been her 28th birthday. On February 12, 2012, the song received the GRAMMY for Best Pop Duo/Group at the 54th Annual GRAMMY Awards®.

Highlighted items of this auction include wardrobe and accessories worn by Winehouse in her most famous and iconic looks and performances that established her not only as a singular artist of immense talent but of individual, trendsetting style.

On offer will be Winehouse’s dress worn in her final stage performance in Belgrade in her 2011 Summer Festival Tour: a figure-hugging halter mini dress. The tour was cancelled just after that first show of the tour. The custommade dress designed by stylist, Naomi Parry – the designer behind Winehouse’s image at the height of her fame 2006-2011 – has a bamboo and floral print on silk incorporated into a Spanx dress and is estimated to sell $15,000-$20,000. Ten other custom-made dresses designed but never worn by Winehouse for the cancelled tour with variations in design and color, from a snake print to a flamingo and palm frond design to a parrot are also on offer (estimate: $5,000-7,000 each dress), as well as an ivory stretch crepe halter mini dress custom-made as the fit dress for Winehouse for the tour (estimate: $800- $1,200). The patterns were featured in the July 22, 2012 issue of the Sunday Times Magazine.

Winehouse’s bold red leather heart shaped purse with velvet lining used at the 2007 BRIT Awards, custom-made and designed for her by Moschino, is also another iconic look associated to the singer (estimate: $15,000-$20,000). Other iconic stage worn wardrobe include a black Tina Kalivas slender fitting skirt with orange dots in a geometric pattern with a ruffle hem worn by Winehouse at the 50th Annual GRAMMY Awards® in 2008 at which she won five of the six awards for which she was nominated. Winehouse appeared on the awards show via satellite from London wearing this skirt (estimate: $3,000-$5,000)

Pieces by Dolce & Gabbana include a mohair blend cardigan with leopard style pattern and self- tie belt worn by Winehouse and photographed wearing the cardigan leaving the Hawley Arms Pub in Camden, UK on March 3, 2011 (estimate: $1,500-$3,000), a D&G slender knee length leopard print pencil skirt that was hiked up into a mini skirt worn by Winehouse for her performance at the 2008 BRIT Awards (estimate: $3,000-$5,000); and a D&G floral gold lamé stage worn gown with fitted bodice (estimate: $5,000-$7,000).

Other fashions related to Winehouse’s trendsetting style include a stretch cotton Karen Millen dress with tropical print worn by the star during her 2007 European tour (estimate: $5,000-$7,000); a Deadly Dames designed by Michelle Pit stretch leopard print tube dress (estimate $5,000-$7,000), a pair of gold tone bamboo heart door knocker earrings (estimate: $800-$1,200) and a pink and white gingham halter mini dress (estimate: $5,000-$7,000) all worn by the star during her 2011 Brazilian tour; three pairs of Winehouse’s pink satin ballet slippers which she was often photographed performing in or out wearing (estimate range: $600-$2,000); a strapless ruched black tulle over flesh tone stretch satin dress worn by Winehouse in the January 2008 issue of Blender magazine with a label that reads “An original by Wheels & Dollbaby” (estimate: $5,000-$7,000); several Fred Perry designed pieces including a black cotton twill varsity style jacket with grey leather sleeves monogrammed with “Amy” in the front (estimate: $1,500- $3,000); a Fred Perry and Amy Winehouse designed black stretch dress with boned bodice (estimate: $1,000-$2,000) and cotton piqué polo style shirt with a houndstooth print (estimate: $800-$1,200) and an ivory silk chiffon scarf with pink trim and dots worn by Winehouse for the Fred Perry campaign photo shoot (estimate: $800-$1,200).

Winehouse’s accessories including a Hermès silk scarf in tones of grey with an origami horse motif (estimate: $500-$700); a Reiss pearlized plastic shell purse with gold tone hardware, gold tone chain, and ivory faille lining (estimate: $800-$1,200); a black leather Miu Miu bowling style purse with emerald green and grey leather (estimate: $1,500-$3,000) and an oversized black patent Giorgio Armani handbag (estimate $1,000- $2,000) together with a card addressed to Winehouse from Armani; two of Winehouse’s signature bustiers, a cotton floral boned bustier worn to The Q Magazine Awards (estimate: $2,000-$4,000) and a satin leopard print bustier (estimate: $1,000-$2,000); as well as personal items such as Winehouse’s sketches on Loock hotel stationary of a guitar, a man in pencil and female face with notes such as “plastic surgery woman” and “cat woman” (estimate: $800-$1,200 each), a Roberts revival Radio, lace bras, style notes and more.

“Amy Winehouse is one of the rare and remarkable music icons whose incredible power and soulful expression in every word and note she sang with her distinct voice remains unmatched by no other artist in music history,” Martin Nolan, Executive Director of Julien’s Auctions. “We celebrate her singular talent and iconoclastic style in this collection of her most personal artifacts and wardrobe worn in her career defining moments”.

Highlighted items will tour around the world in South America, Europe and the U.S. for the public to view prior to the auction at the following venues: