The Tiffany True Engagement Ring is finally here! Last year we teased the new diamond cut from iconic jeweler Tiffany & Co., and it has officially debuted in the Believe In Love campaign.

The film captures the intimacy between two people, and the Tiffany True engagement ring as a symbol of their bond. Lady Gaga’s original song “Is That Alright?” from the film A Star is Born, is featured in this latest chapter of Tiffany & Co.’s Believe In Love campaign.

Lady Gaga is a longtime friend of the brand, appearing in a previous campaign and more recently, taking to the red carpet in Tiffany’s innovative designs for her Golden Globe®, Screen Actors Guild®, Grammy®, and Academy Award® wins for her work in A Star is Born. It was at the 91st Academy Awards® that she wore the iconic Tiffany Diamond, marking the first time the legendary stone has ever appeared on a red carpet.

The campaign film, which features Tiffany’s new engagement ring, echoes the emotional connection of love captured by the song, and launches globally on April 1, 2019. 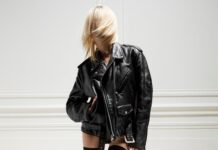