This season, Dior collaborates with Sacai on a Men’s capsule in which Kim Jones, Artistic Director of the House’s Men’s lines, engages in a dialogue with chitose abe, founder of the japanese label.

This season, the House of Dior collaborates with the independent label sacai on a project that represents a creative conversation between two designers, two heritages and two cultures: Dior men’s Artistic Director Kim Jones working alongside Chitose Abe of the Japanese brand sacai (founded in 1999) to create a men’s capsule collection.

A variation on the iconic Dior logotype epitomizes the approach: within the ‘i’ of Dior can be found the name sacai, just as the garments fuse the unmistakable identities of both labels, aesthetics and outlooks.

One signature of sacai, is the hybrid: here, the entire collection follows that spirit. Garments combine Dior tailoring with sacai’s sportswear hallmarks, the inimitable savoir faire of Dior blended with sacai’s technicality. Characteristic Dior silhouettes – overcoats, the Tailleur Oblique – are combined with new fabrics and techniques drawn from the sacai universe. Floral decorations from the Dior universe are combined with the modern fabrications characteristic of sacai. The color palette is focused: predominantly black and white, evoking a mid-century fashion photograph brought to life.

A creative exchange between Paris and Tokyo – a feature of couture creations by Christian Dior himself – is expressed throughout. Japanese denim is used for pieces that blend workwear shapes and utilitarian detailing with the refinement of a Parisian couture house; emblematic Dior pieces, including soft berets executed by Stephen Jones, are re-examined and reworked, embracing Dior history from a new perspective.

The various bags in the Saddle universe are distinctive for utilitarian embellishments – like pockets or drawstrings – specific to the Japanese brand, but also for an interplay of materials such as Nylon and leather in vibrant shades of olive and orange, echoing the classic sacai bomber jacket. The soles of the Dior Snow and Dior Explorer boots are boldly layered, reflecting sacai’s inventive vocabulary. Jewels add a final touch of originality, with the CD Icon logo in gold- and silver-finish brass punctuated with sacai’s signature pearls.

Each look is the result of a discussion between Kim Jones and Chitose Abe – long-time friends, and now creative collaborators for the first time. This unique collection represents an exchange of ideas between two creatives, a true fusion. A new viewpoint on both brands, framed through the heritage of Dior, starting from November 2021. 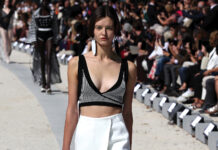